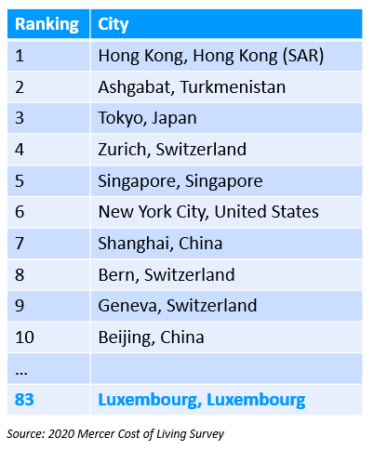 Comparing the cost of living in different cities is not an easy task as many factors influence. Mercer’s Cost of Living Survey studies factors such as currency fluctuations, cost inflation of goods and services and instability of accommodation prices, which it deems essential for determining the cost of expatriate packages for employees on international assignments.

Hong Kong tops the list of most expensive cities for expatriates, followed by Ashgabat, Turkmenistan in second position. Tokyo and Zurich remain in third and fourth positions, respectively, whereas Singapore is in fifth, down two places from last year. New York City ranked sixth, moving up from ninth place.

Three European cities, all located in Switzerland, are among the top 10 list of most expensive locations: Zurich (4) remains the most costly European city, followed by Bern (8) and Geneva (9).