Living in Luxembourg is clearly attractive. Nestled between Belgium, Germany and France, Luxembourg is globally renowned for its successful long-term economic performance and high quality of life. The 2022 World Happiness Report ranks it as the 6th happiest country in the world, a ranking in particular driven by the country’s strong GDP performance and high levels of freedom and life expectancy. The capital, Luxembourg City, also ranked 3rd in the world in the 2021 Global 150 Cities Index, which identifies cities worldwide that have the ideal combination of high salaries, low taxes, reasonable costs and good quality of life.

Living in Luxembourg: the most international EU country

With residents from over 180 countries making up 47% of the population, Luxembourg is the EU’s most international country, attracting people from near and far. Its international heritage and continued multinational outlook is mirrored in its three national languages, Luxembourgish, French and German, with English also widely spoken and commonly used in the business world.

A European capital steeped in history

Famous for its leading financial centre, Luxembourg City counts as one of the capitals of the EU and is home to a number of important Community institutions: the Secretariat General of the European Parliament, the Court of Justice, the European Investment Bank, various units of the European Commission, the European Court of Auditors, the Publications Office, and so on. Visitors can pass by the building where the initial agreement laying the foundations of today’s EU was signed, or make an excursion to the village of Schengen bordering Germany and France where the Schengen Agreement (1985) and the Schengen Convention (1990), which abolished border controls, were both signed.

The history of the city dates back all the way to 963, when a first small castle was built here by Count Siegfried. Due to its strategic location that was perfectly suited for fortification, many of Europe’s main powers occupied Luxembourg during the centuries preceding its independence in 1815. The old quarters and the remains of the fortifications have been listed as UNESCO World Heritage sites since 1994. As well as providing an interesting insight into Luxembourg’s origins and past as a military stronghold, a stroll through the old town offers spectacular views of the city’s modern skyline and the green and picturesque valley that cuts the city centre in half. 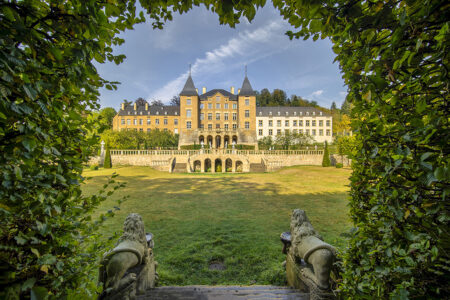 The historical importance of Luxembourg is also reflected in its over 50 castles, most of which date back to the Middle Ages. Located on forest-covered hills or in picturesque villages, a number of them have been restored to their former beauty.

Vianden castle has been listed by CNN as one of the 21 most beautiful castles in the world. It is possible to explore the Brandenburg castle ruin dating back to the 10th century or enjoy a dinner within the 12th century walls of Bourglinster castle. Clervaux castle hosts a World War II museum, a collection of models of Luxembourg’s fortified castles and the famous documentary art photography exhibition “Family of Man.” The Grand Ducal Palace in Luxembourg City also opens its doors to visitors during the summer months.

The hiker’s and biker’s paradise 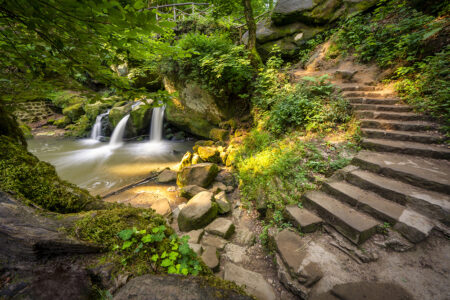 If one castle visit is not enough, another option is to put on hiking boots and explore a thousand years of Luxembourg’s history in one go by following the 37 km national hiking trail “Valley of the 7 castles”. Hiking is in fact one of the most popular activities in Luxembourg. 5,000 km of signposted trails criss-cross the country from the hills of the Ardennes in the north to the Red Rock region in the south.

Walkers can explore the forests, canyons and towering rock formations of the Mullerthal region – Luxembourg’s “Little Switzerland”, which has just been awarded the UNESCO Global Geopark label – or follow the Moselle river that constitutes a natural border with Germany. Signposted paths range from tours of a few kilometres to the award-winning Mullerthal Trail (112 km), the Escapardenne Lee Trail & Eislek Trail (158 km across the Belgian-Luxembourgish Ardennes) and the 9 cross-border routes between Germany and Luxembourg of the NaturWanderPark delux (170 km).

Cycling is also an excellent way of discovering the country. Luxembourg has 23 official cycle paths totalling almost 700 km that cover the country from north to south. There is another 700 km of signposted mountain bike tracks.

Luxembourg’s vibrant cultural life includes art, music, dance, theatre and much more performed by world-class artists. For a small country, Luxembourg has an impressive list of museums, art centres, galleries and independent stages which includes Rockhal, an international live music venue, and Philharmonie, a renowned concert hall with musicians from all over the world. It also has the second highest concentration of Michelin-starred restaurants per capita in the world. Luxembourg, the only Grand Duchy in the world, is definitely worth a visit.