Luxembourg joined the European Space Agency (ESA) as a full member in 2005. The launch of the SpaceResources.lu initiative in February 2016 further intensified cooperation and paved the way for ESA’s publication of a space resources strategy in 2019. However, both sides felt that there was a need to go further. 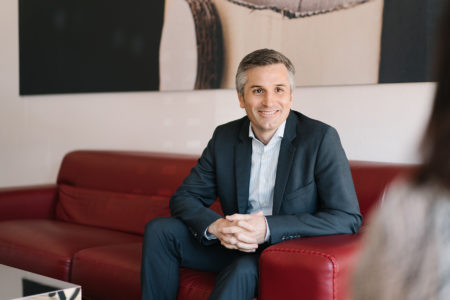 “The space resources field is moving ahead exceptionally fast, not least in the US and China,” says Mathias Link, Director – International Affairs & SpaceResources.lu at the Luxembourg Space Agency (LSA) and Acting Director of ESRIC. “We need to make sure that Europe in general and Luxembourg in particular keep our first mover advantage.”

The solution was to set up ESRIC, a joint creation of ESA, LSA and the Luxembourg Institute of Science and Technology (LIST) that hosts the young centre. A first step currently underway is to transfer space resources utilisation research equipment developed by ESA to ESRIC and launch research activities there.

One of our first research areas is to demonstrate how the extraction of oxygen and metals from lunar regolith could be used to generate life support for astronauts.

“ESRIC is the one of the few centres in the world that is completely devoted to research on the use of space resources,” comments Dr Link. “One of our first research areas is to demonstrate how the extraction of oxygen and metals from lunar regolith could be used to generate life support for astronauts and in-space manufacturing of equipment. We are also planning research on other parts of the value chain for space resources utilisation together with European partners.”

Involving companies in ESRIC’s activities from the very start is essential. “Our industry-oriented approach is quite unique and the response from the business community has been extremely enthusiastic. Companies specialised in space resources – Luxembourg-based iSpace, Made in Space and Blue Horizon, for example – are of course eager to work with us. Space technology leaders such as Europe’s large space system integrators are interested as well. We are also in touch with companies in relevant terrestrial sectors: mining, oil and gas, and construction, for instance.”

Dr Link hopes that ESRIC will stimulate new commercial partnerships related to both the space and the terrestrial economy, and boost the development of space resources start-ups. The centre will set up a programme aimed at supporting early-stage start-ups in the field and even incubate promising young ventures at its premises.

A permanent human presence on the Moon might not be that far away.

Although research related to space resources might still seem like science fiction to the uninitiated, and is a rather long-term activity, its outcomes could be applied to the existing terrestrial and space markets in the near term. “A permanent human presence on the Moon might not be that far away,” muses Dr Link. “Scientists stationed there would have to rely extensively on robotics and autonomous systems, for example, and have solutions for how to access energy. Any breakthroughs in these fields would also be very useful on Earth. Our objective is to focus on the commonalties between existing terrestrial and future space value chains in order to spin in and spin off various technologies.”

The current ESRIC team of 6 expects to be 12 at the end of the year and grow to around 30 by 2024. It might even spin off from LIST one day and become a completely independent centre. The centre might well develop partnerships that go beyond Europe.

“We already have discussions with China and the US. NASA is very enthusiastic about the launch of ESRIC,” says Dr Link and mentions that Luxembourg is one of the signatories of the Artemis Accords, an international agreement between governments of participating nations in the NASA-led Artemis programme which aims to bring the next man and the first woman to the moon in the next few years. “Our ambition is clearly to play a role at the international level.”