ExoAtlet on the road to certification in Europe 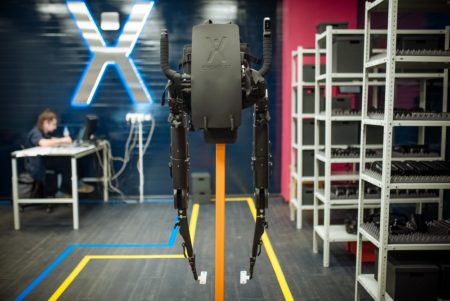 Standing up and walking is an everyday activity for the vast majority of people. It is a dream for others, confined to a wheelchair or bedridden, following an accident or illness. A dream that ExoAtlet is doing everything possible to make a reality.

The company, established at Technoport in 2018, is the result of a journey that began in Moscow in 2011, when a team of scientists from the Moscow State University Research Institute of Mechanics won a public tender for the creation of an exoskeleton for emergency rescue operations.

Soon the research team, joined by specialists from the private sector, expanded its scope of work to include an exoskeleton for medical use. As a result, in 2013, ExoAtlet was born and quickly impressed the market with its innovative product.

The following year, it joined the Russian Skolkovo Foundation and even took part in the in the World Robotics Olympiad in Sochi (Russia). At the same time, the project was presented and selected at the National Rehabilitation Centre in Singapore.

One thing led to another and the first clinical trials were carried out in 2015 at the Rehabilitation Department of the Pirogov National Medical and Surgical Centre. The market launch in Russia and then in Korea took place in 2016.

Today, ExoAtlet’s exoskeletons are sold in about ten countries. They stand out from the competition due to advanced digitalisation, with a real control panel connected to the cloud, allowing a more precise movement guidance for the patient. “We cover a large number of conditions as our system analyses movement trajectory and adjusts step height to go over obstacles, and as an assistive software adjusts the level of support as the patient gets stronger. We work in a system of comprehensive rehabilitation”, CEO and co-founder of ExoAtlet, Ekaterina Bereziy explains.

Spotted by Luxinnovation as part of its collaboration with the Skolkovo Foundation, ExoAtlet established its headquarters in Luxembourg in 2018 to enter the European market. It has already raised nearly 8 million USD of funds over the last three years, notably from the Korean company Cosmo & Company.

Ekaterina Bereziy is aware of the immense potential of this device. “Nearly a quarter of the world’s population suffers from some kind of disability. Not being able to walk is a terrible impediment and only such an exoskeleton can give these people the ability to stand up and walk again. We already have several thousand patients using our device. The results are truly amazing.”

In May, ExoAtlet’s exoskeleton should receive the necessary approvals to be marketed in Europe. While hospitals are the company’s primary target, rehabilitation centres are also considered. “We have also developed the ExoGym concept, a place that would make it possible to concentrate in one place the key stages of rehabilitation and inclusion of patients, be they adults or children”.

A big symposium in November

One of the specificities of ExoAtlet is that some model line of exoskeletons, which are under development at the moment, would allow children as young as two years of age to benefit from the advantages of this technology. And much more. “As we see it, the solution lies in exoskeletons as a part of the ecosystem for continuous, comprehensive rehabilitation”, Mrs Bereziy points out.

The company was one of the Luxembourg exhibitors at the Arab Health trade fair held in Dubai at the end of January and is also planning to be present again at the Medica trade fair in Düsseldorf in mid-November.

A few days later, on November 25, ExoAtlet will also organise its first symposium in Luxembourg, «ExoRehab Spotlights 2020»: around 15 speakers from Luxembourg, Netherlands, Portugal, Russia and South Korea together with 150 medical specialists from different countries will discuss ExoRehabilitation.