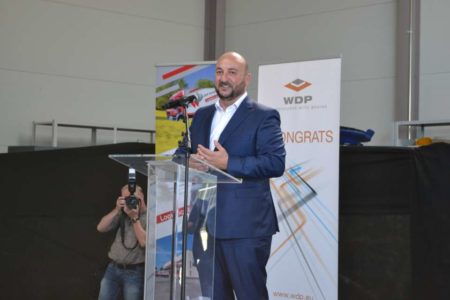 This bridge is part of the infrastructure set up to ensure smooth road traffic around the Eurohub South site. The new viaduct and the interchange at Burange / Dudelange allow semi-trailers to access the Eurohub South directly from the motorway network via two separate accesses from the A3 and the A13 without having to cross neighbouring villages.

The projects that have recently been completed or announced on the Eurohub South site represent 150,000 m2 of logistics space and will occupy about 800 people on the site. In total, since 2013, around 250,000 m2 of logistics space have been built or are under construction in Luxembourg, which corresponds to the surface of more than 35 football pitches and represents an investment of around €250 million from the companies concerned.

The Arthur Welter group announced the establishment of its new company Arthur Welter Logistics on the Eurohub South site. The company will build a 25,000 m2 building which will house the headquarters of the new entity and include offices and a logistics hall for warehousing, order preparation and regional distribution of goods. This €20 million investment will create 50 new jobs and is part of the company’s sustainable development strategy initiated by the Welter family more than 50 years ago.

Infrastructure investments are paying off

Deputy Prime Minister and Minister of the Economy Étienne Schneider said: “Investments in infrastructure to develop the logistics sector in Luxembourg are paying off and they are attracting international companies that serve their customers from Luxembourg and contribute to the development of the activities and skills of the national logistic actors.”