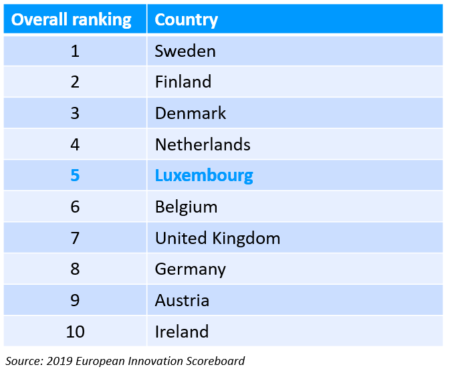 Following the innovation leaders Sweden, Finland, Denmark and the Netherlands, Luxembourg has the fifth best innovation performance in the EU according to the 2019 European Innovation Scoreboard. The country is first in the group of strong innovators that also includes the UK, Germany, Austria and France, among others. It performs particularly strongly in several sub-categories.

The category Attractive research systems is based on international scientific co-publications, most cited publications and foreign doctorate students. Luxembourg performance in this category is almost twice that of the EU average, which places the country at the top of this category before Denmark, the Netherlands and Sweden.

Luxembourg also performs strongly in the category Finance and support and ranks 3rd after France and the Netherlands. This category looks at R&D expenditure in the public sector and venture capital expenditures.

A third category where Luxembourg’s performance stands out is Intellectual assets where the country is also 3rd after Malta and Denmark. This category is based on PCT patent applications, trademark applications and design applications.