On 22 October 2019, the Luxembourg Space Agency and NASA, the US federal space agency, signed a joint statement of intent to further deepen US-Luxembourg cooperation in space. The agreement was signed during the 70th International Astronautical Congress held in Washington DC on 21-25 October. This agreement is a continuation of the Memorandum of Understanding (MoU) on space between the US and Luxembourg governments, signed in May this year. The MoU designated NASA and LSA to exchange information about prospective collaboration. 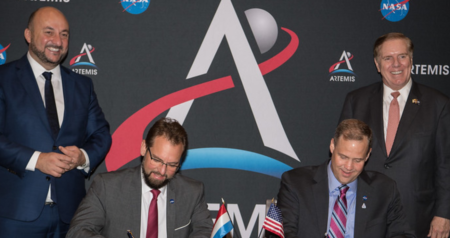 Both the US and Luxembourg are at the forefront when it comes to advancing opportunities for commercial space activities. There are thus many points of shared interest between NASA and LSA, such as NASA’s intention to return humans to the surface of the Moon by 2024. The agency also plans to establish a basis for long-term human presence on the Moon by 2028. This basis would support human exploration of Mars. These initiatives can also foster space resources exploration and use, and stimulate the contribution of private companies and public-private partnerships to the exploration and use of the Moon, Mars and other celestial bodies.

The joint statement details a number of areas for potential future collaboration. These include space applications, space exploration, the sustainable use of space resources and sharing of scientific data and education. The two agencies will continue to explore these areas with the objective of identifying potential opportunities to work together. In parallel, they plan to work on a framework agreement to facilitate future collaboration. 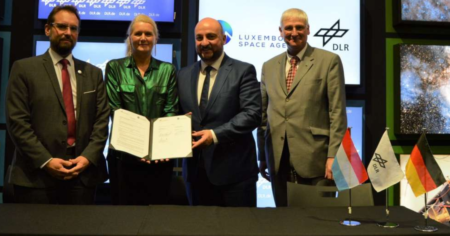 LSA also signed a second collaboration agreement during the International Astronautical Congress, this time with the German Aerospace Centre (DLR). Through a Letter of Intent, the two agencies agreed to work together in the field of space research activities. The cooperation will in particular focus on topics such as navigation, satellite communications, space exploration and space resources, including robotics and in-orbit services. The intention is to channel the collaboration through the interdisciplinary space resources research centre to be set up in Luxembourg as part of the SpaceResources.lu initiative.

“The German Aerospace Center has already been a long-standing partner,” said Marc Serres, CEO of LSA, when commenting on the signature. “Together with DLR and other partners, we want to further develop research activities in areas such as the utilisation of space resources for the benefit of humankind.”